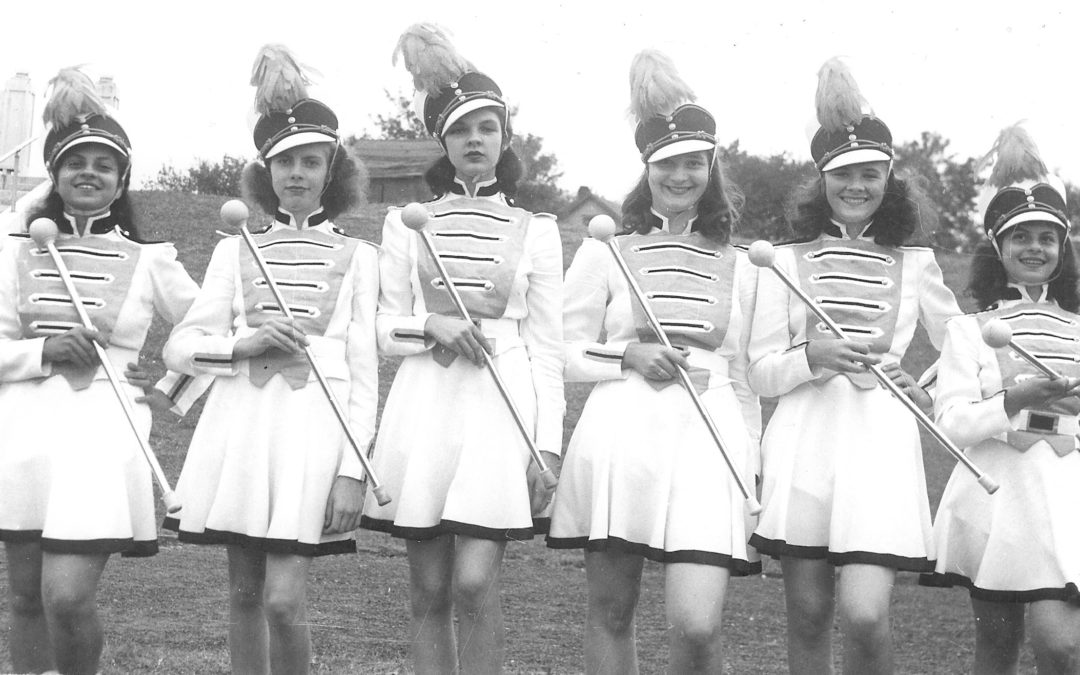 The following was submitted to the Wilmington News Journal as a follow up to the throwback image:

“My name is Al Fife. Anna Mae Schramm was my beloved mother. She was 14 yrs old in that photo. I wasn’t even born yet!

That year was the bombing of Pearl Harbor by the Japanese. The high school Majorette photo  was taken Sept 30, 1941 so the attack came just 2 months and 1 week later. She was born on Dec. 6, 1926. So, having just turned 15, Anna Mae was laying in bed in her room on Sunday Dec. 7. She was listening to the radio and one of the first news reports of the attack came over the radio. Anna ran downstairs and told her mom about the attack. My grandmother did not believe her. She said, oh honey that is just a radio program like “War of the Worlds”. Later that day it was all over the news and her parents had to apologize.
Also, June Brandenburg, one of the other Majorettes in the photo, lived next door to Anna Mae on North South St. Just so happened that their bedrooms faced each other and were separated by about 35 yards. The  girls got two tin cans and some string and stretched it from June’s room to Anna Mae’s room. Anna Mae told me it worked, but they had to scream into the cans to hear one another! I’m sure Alexander Graham Bell would have been impressed.
Times had been tough coming out of the great depression. My grandfather, Alfred H. Schramm, supplied the meat for the family by hunting squirrel and rabbit. At that time, North South Street ended in the rural wooded country side of the county. Anna Mae grew up on squirrel and rabbit meat. Her dad would always cut off the squirrel tails and give to Anna Mae. She tied them on her bicycle. Squirrel tails were tied to the handle bars, fenders, the rear reflector and who knows where else. Anna rode her bicycle to school just down the street at Smith Place School. The tails would fly in the wind and leave a trail of fur behind her as she raced down the street like the way a squirrel scurrys up a tree. Well, you might have guessed by now but this earned her the nickname “Squirrel Tail Anna”. Yes it is a true and  funny antidote but just think if she had put rabbit tails on the bike and been known as “Anna Cotton Tail”. My mom never changed. She maintained her zeal for life. She died on December 27, 2021 at age 95 after surviving a terrible fall that left here bedridden the last 5 months of her life. She loved all kinds of animals. We lived in the country when I was a little boy. We always had plenty of cats, dogs, chicks, gerbils, hamsters  and rabbits.
One Easter my mom brought home two small rabbits for me. Within a year my dad had to build a pen in the side yard to hold all the rabbits.
I loved my mom more than even I knew. And she loved me even more than I knew. She taught me Christian values and to have respect for other people because we were all made in God’s image. She never physically harmed me in any way. She would just tell me to go to my room. I spent a lot time in my room. Oh, yes, she loved being a Majorette. The original black and white photo with her fellow Majorettes still hangs on her bedroom wall to this very day. Many times I have looked at it during my life. I always would come away each time with a feeling of respect and admiration for mom. Squirrel Tail never changed. She lived her life to the fullest and loved me completely and having loved me, she loved me to the end. I miss her tremendously.”