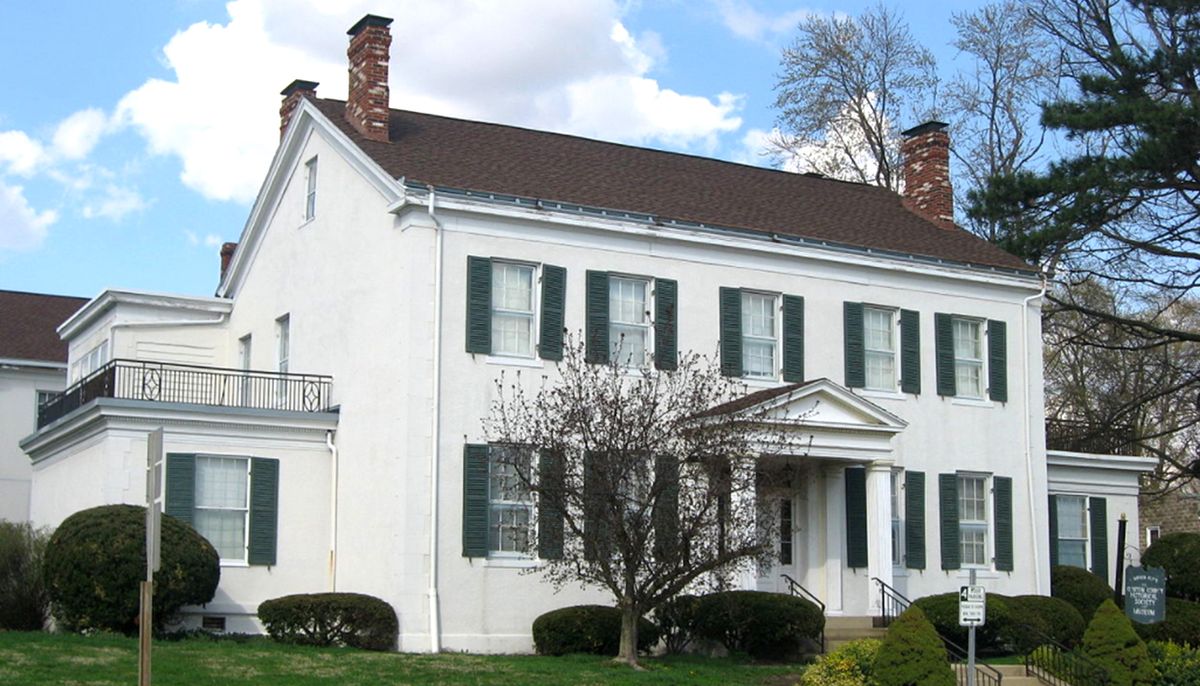 The Mission of the Historical Society

The Mission of the Clinton County Historical Society is to encourage community involvement in the preservation, education, and promotion of Clinton County history and genealogy for the benefit of all people for present and future generations. A non-profit 501(c)(3) organization, the Society was chartered in 1948 and is governed by a Board of Trustees.

Stan is a retired construction executive, living in Greene Township with his wife Georgialia.  When he isn’t attending History Center board meetings, you can find Stan golfing, flying, traveling or visiting his six grandchildren.

Suzanne is a descendant of the Sewell and Harvey families of Clinton County.  She is a member and past president of the Clinton County Genealogical Society and member and treasurer of George Clinton Chapter DAR. A graduate of Ohio State University, she has had a career in education, corporate advertising, and market research. Her volunteer experience includes Treasurer, Junior League of Chicago, American Cancer Society Fund Raising Chair in Huntington Harbour, California and Neptune Beach, Florida.

Patti Herron is a shareholder in the firm of Wagenseller, Foley, Hollingsworth & Co., Certified Public Accounts.  Since 1984, she has been actively engaged in providing accounting, tax, management advisory services and financial and estate planning to a wide variety of closely held companies and individuals.  Patti has a practice emphasis in agri-business accounting and farm tax planning and advisory services.

Christine Hadley Snyder was born in the c1830 farmhouse built by her great-great-great grandfather Eli Harvey (1803-1872), which she now maintains as a family museum and event venue, and manages the family farms. She was a birthright member of Springfield Friends Meeting, where in the burial ground lie seven generations of her ancestors. She attended all twelve years at Adams Township School, and earned a B.Sc. Degree in science education from OSU and a B.A. in Spanish and a Master of Humanities from Wright State, plus additional work in veterinary practice management. She and her husband served in the Peace Corps 1964-66. She has taught high school and university, and served as CFO of her husband’s veterinary clinic for 31 years. She served on the Wilmington College Board of Trustees for twelve years, the final four years as Chair. She has served as President of the Clinton County Genealogical Society and volunteers in the research library. She is currently working on the Quaker Scenic Byway project and serves on the Board of Energize Clinton. She and her husband love to travel the world, including visiting their three grown sons and six grandchildren.

Susan’s ancestors have lived in the Wilmington area since 1804. She and her husband, Nial have been married 52 years and also reside in the area. They have a son and a daughter. Susan is currently a member of 5 lineage societies, as well as the DAR and Colonial Dames XVII Century. She have been involved with the genealogy society and library for 15 years. A little known fun fact, her grandparents were charter members of the Clinton County Historical Society.

Wilmington native, Nicki Bennett, has a passion for genealogy and local History.  She has been a teacher at Lynchburg-Clay for over twenty years.

Tim was raised in Clinton County and received a juris doctorate from the Ohio State University’s Law School.  Tim has been a judge since 1985, originally serving for fifteen years as the Clinton County Municipal Court Judge.  Since 2001 he has served on the bench of the Clinton County Common Pleas Court.

Taylor is a descendant of a long line of Quakers of the Hadley-Bevan and Moore families and is an 8th generation Clinton Countian. He is a graduate of Wilmington High School, Butler University and holds a Master Degree Planning from the University of Cincinnati-College of Design, Architecture, Art, and Planning (DAAP). He serves as the Executive Director for the Clinton County Regional Planning Commission. Locally, he serves on the board of Energize Clinton County (ECC), Main Street Wilmington, and the Clinton County Trails Coalition. 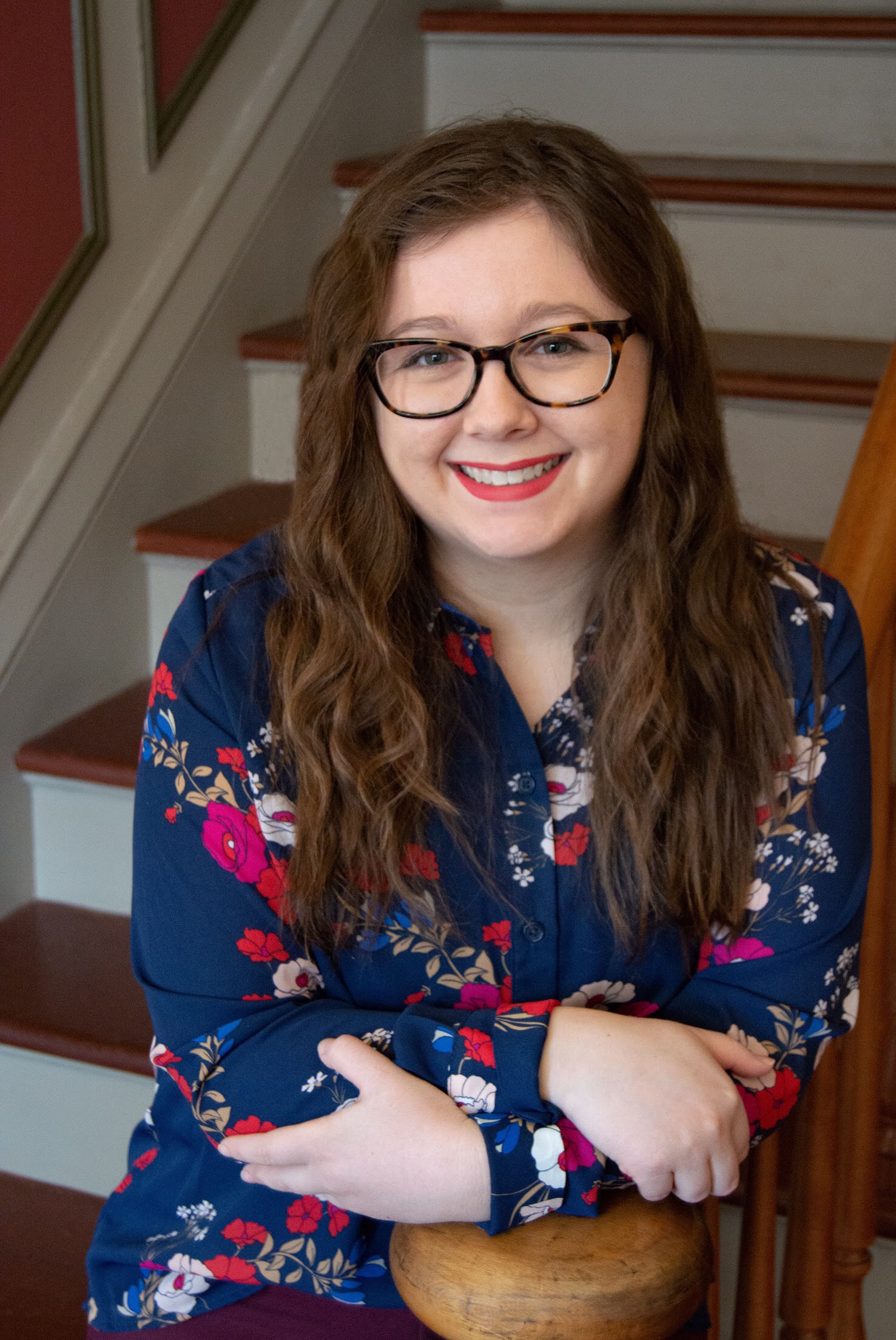 Graduating from Wilmington High School in 2013, Shelby is a Clinton County native. Shelby earned her Bachelor’s Degree in History and Political Science from Ashland University in 2017. She is an Ashbrook Scholar Alumna and Gilder Lehrman Institute of American History Scholar. Currently earning her Masters in Public History, Shelby will graduate from Northern Kentucky University in Spring 2020. She currently lives in Wilmington with her family./p> 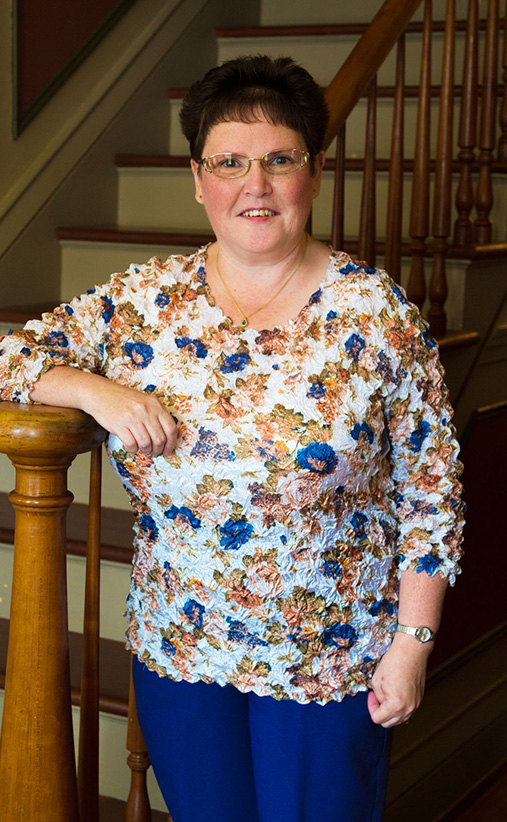 A New Vienna native, Bev has resided in Clinton County most of her life. She is a graduate of East Clinton High School and attended Cincinnati Christian University. Bev worked in the banking industry for over 30 years and is a current member of the Wilmington Lions Club, serving as the editor of their bi-monthly newsletter. Bev and her husband John currently live in the Wilmington area. 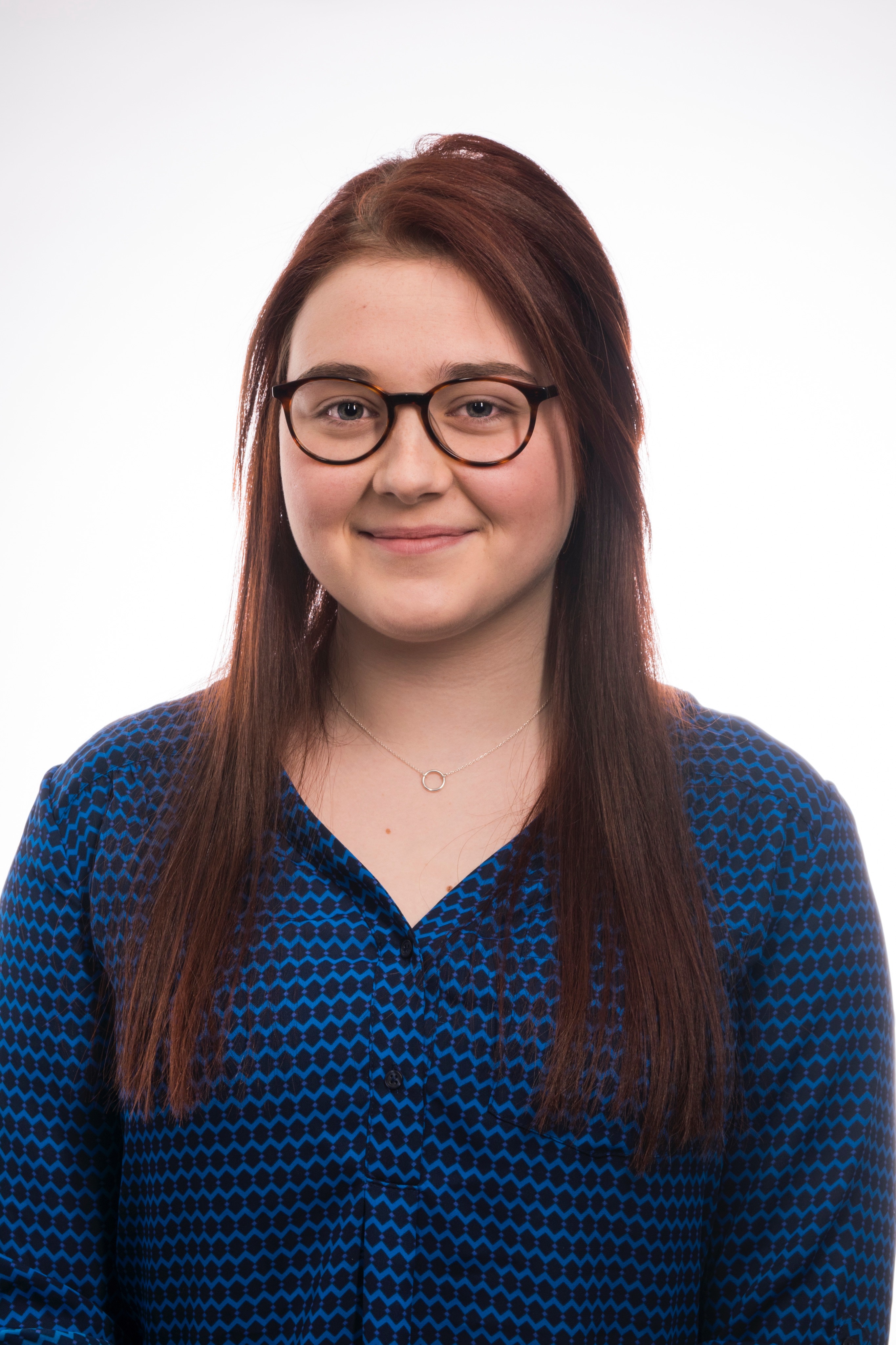 Earning her Associates Degree from the School of Advertising Art, now known as the Modern College of Design, Molly resides in Wilmington with her pet Chinchillas and currently operates her own freelance business. Passionate about art, graphics, and assisting non-profits, she generously donates her time and talents to the History Center regarding social media maintenance, in-house design work, and more.

About the Museum at Rombach Place

Housed in a mid-1800s residence, Clinton County History Center has a touring museum.  The home was purchased by Matthew Rombach (General Denver’s father-in-law) in 1855, and is also referred to as Rombach Place Museum.  The museum features rotating exhibits that highlight different artifacts and textiles in the collection.  Exhibits also include the largest collection of Eli Harvey, internationally known Quaker artist, paintings and sculpture; Carl Moon photographs; artifacts of General Denver’s military and political career; medical and dental instruments; children’s toys; prehistoric Indian relics and more.   For the researcher:  There is an extensive collection of textiles and Quaker artifacts available for scholarly research.  The Clinton County History Center is handicapped accessible. 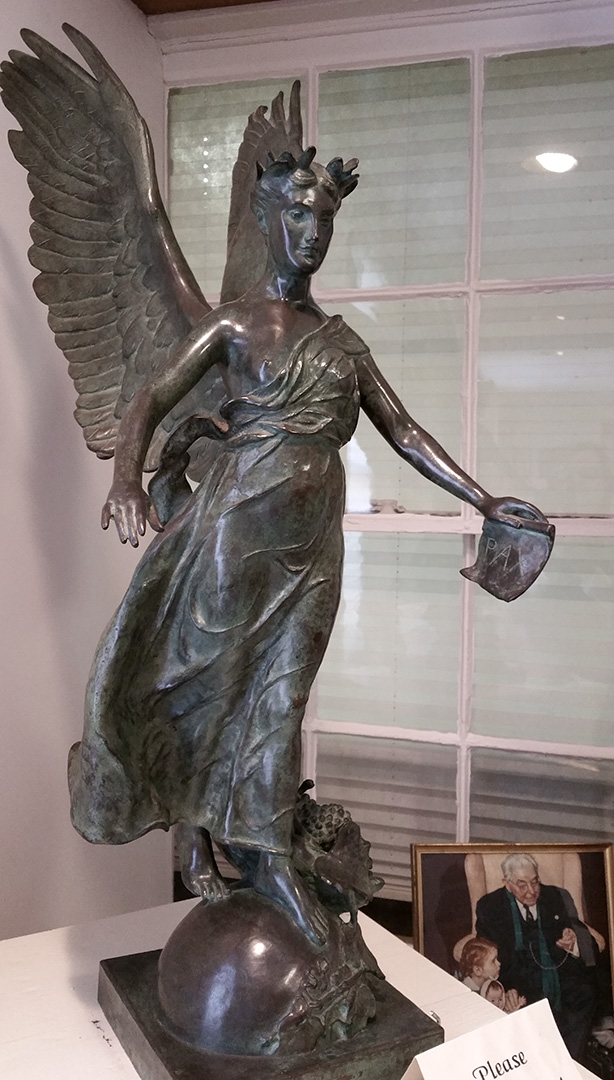 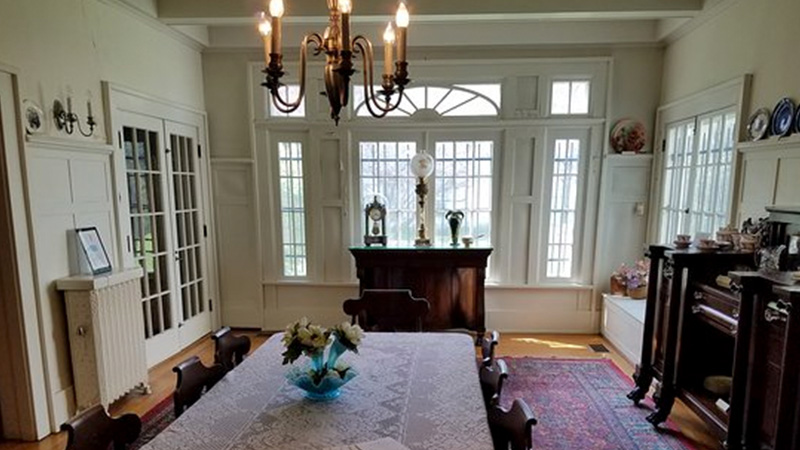 Annual Giving Contributions to the Clinton County Historical Society’s Annual Giving Fund are an investment in our role as a historical and cultural institution.  Revenue generated from this fund goes to support the operations of the Society, including preservation supplies for our collections, educational materials and exhibit preparation and installation.

Bequeath or Memorial Bequeaths and memorials to the Clinton County Historical Society can honor your passion for Clinton County history or honor a friend or loved one’s life.  No gift is too small.

Planned Giving Numerous options are available through Planned Giving.  While we cannot provide financial or legal advice, we would be happy to meet with you and your advisor to discuss your gift plan.

The research library has a comprehensive collection of genealogy material.  The History Center also maintains archives of photographs; scrapbooks; manuscripts; Township ledgers; club and organization records; topical files; historic buildings; school, business and church/meeting information. We believe the collection and archives should be used to advance knowledge and can be made accessible to serious students and scholars for research. Access to our collection is secondary to its preservation, and will be given or denied by the Director. If you would like to inquire about access, please contact us by phone or email prior to arrival.

For research requests regarding Clinton County history, not related to genealogy, please contact the History Center at (937) 382-4684 or e-mail us at Info@ClintonCountyHistory.org.

Requests for genealogical research should be sent in writing to:

Research inquiries are directed to one of our volunteers. We attempt to answer short, clear and direct questions. Requests for information should include:

If you wish more extensive research, you may want to contact a paid researcher.

The Clinton County History Center makes images available for a single use, specific project or production. Images furnished by CCHC may not be resold, licensed, rented or reused in any other production or for any purpose other than originally specified.  All requests for photographic reproduction must be submitted to the Executive Director. There is a $10.00 use fee per photograph, plus reproduction costs. The Clinton County History Center reserves the right to refuse any requests.

Please contact us to discuss availability of Non-Business Hour rentals.

Born in 1817 near Winchester, Virginia, he and his family moved west to a farm near Wilmington in 1831. After receiving a degree from the Cincinnati Law School, he moved to Platte City, Mo., and opened a law office with a partner.

Always in motion, Denver recruited a volunteer infantry in the war against Mexico and served under Gen. Winfield Scott. He led a party overland to California during the Forty-niner gold rush. He served in the California State Senate, was appointed secretary of state from California and elected to Congress from California in 1855.

That same year he married Catherine Rombach, daughter of Matthew Rombach of Wilmington where the couple made their home.

Involved in national politics, Denver served as commissioner of Indian Affairs in 1857, governor of the Kansas Territory during the era of “Bleeding Kansas,” and in the Civil War became brigadier general of all federal troops in Kansas.

In the later years of Denver’s career, he organized a Washington, D.C., law firm representing Indians against the U.S. government for treaty violations. 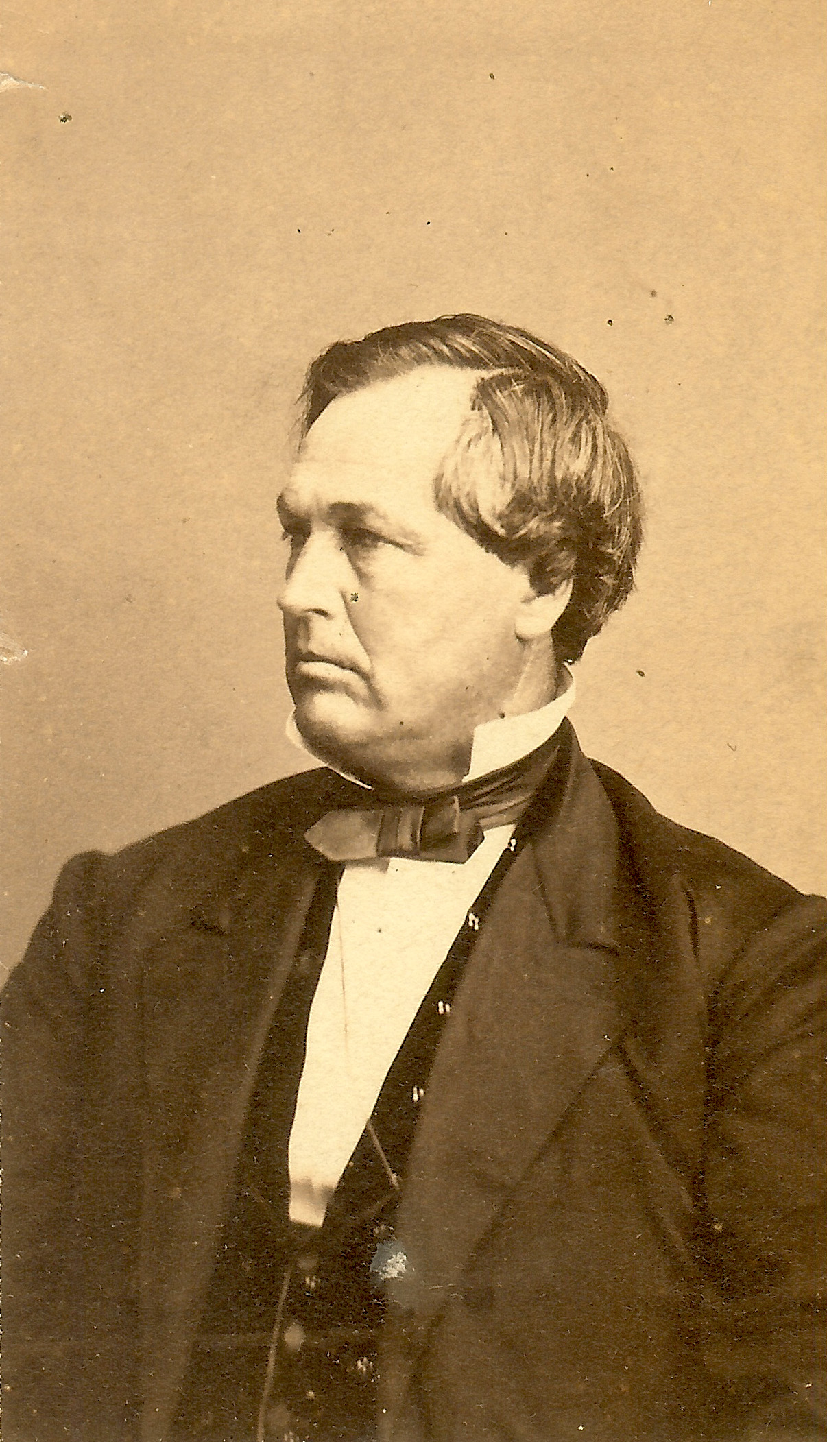 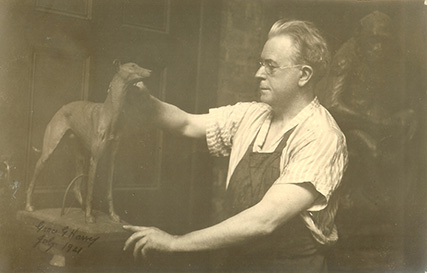 Eli Harvey, internationally known artist and sculptor, was born Sept. 23, 1860, near Springfield Friends Meeting in Clinton County, and died Feb. 10, 1957, at his home and studio in Alhambra, Calif. His ashes are buried at the Harvey family lot in Springfield Friends Cemetery.

Before his death, Harvey gave many of his paintings and bronzes to the historical society.
The collection of paintings and sculpture shown in the gallery at Rombach Place are by Harvey including a bronze copy of a bull elk, symbol of the Order of Elks, commissioned in 1904.

Carl Moon, Photographer of the Southwest

The second floor hallway makes a gallery for the photographs of Southwest Indians taken by Carl Moon in the early 1900s. Originally from Wilmington, Moon was among the first to photograph American Indians in their natural habitat. Drawn to the Southwest by his abiding interest in Indian culture and an intense desire to preserve what he saw as a vanishing way of life, he spent many years traveling and taking pictures among the various tribes, primarily in Arizona, New Mexico and Oklahoma. His wife, Grace Purdie Moon, once remarked, “Mr. Moon and I like to write about Indians and picture them because I think way down in our hearts, we almost wish we were Indians ourselves.” 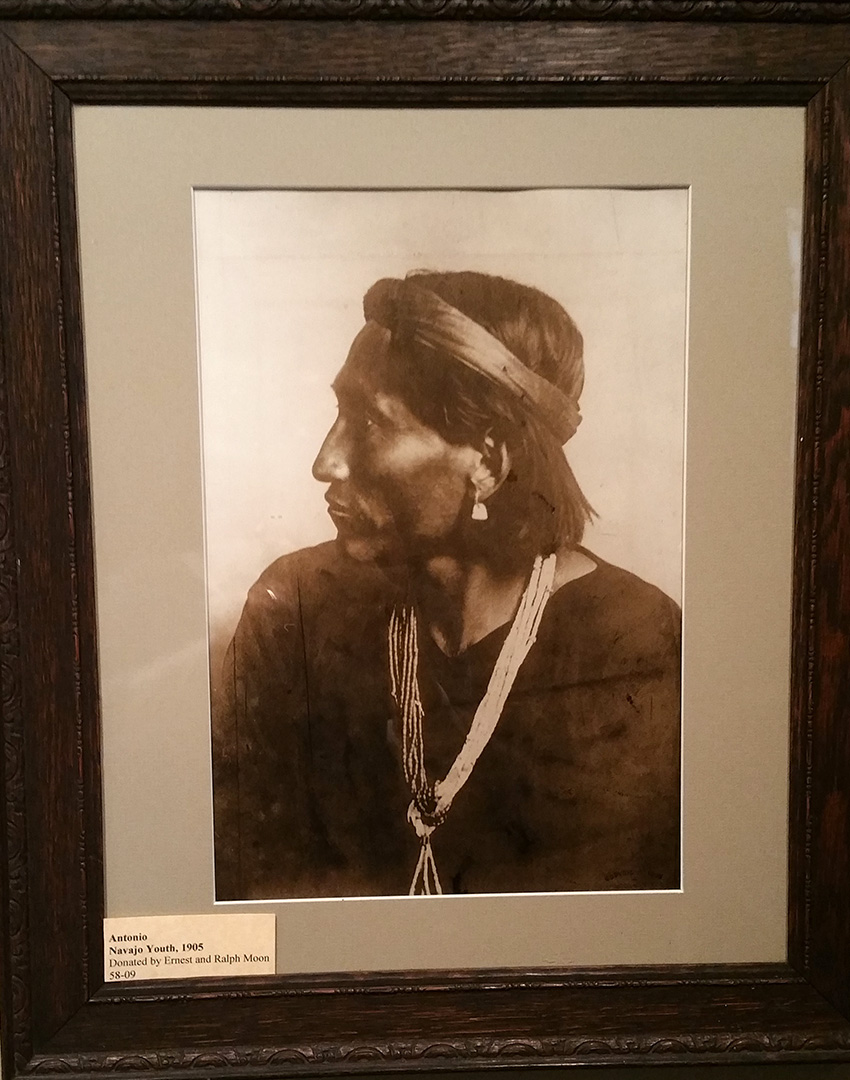 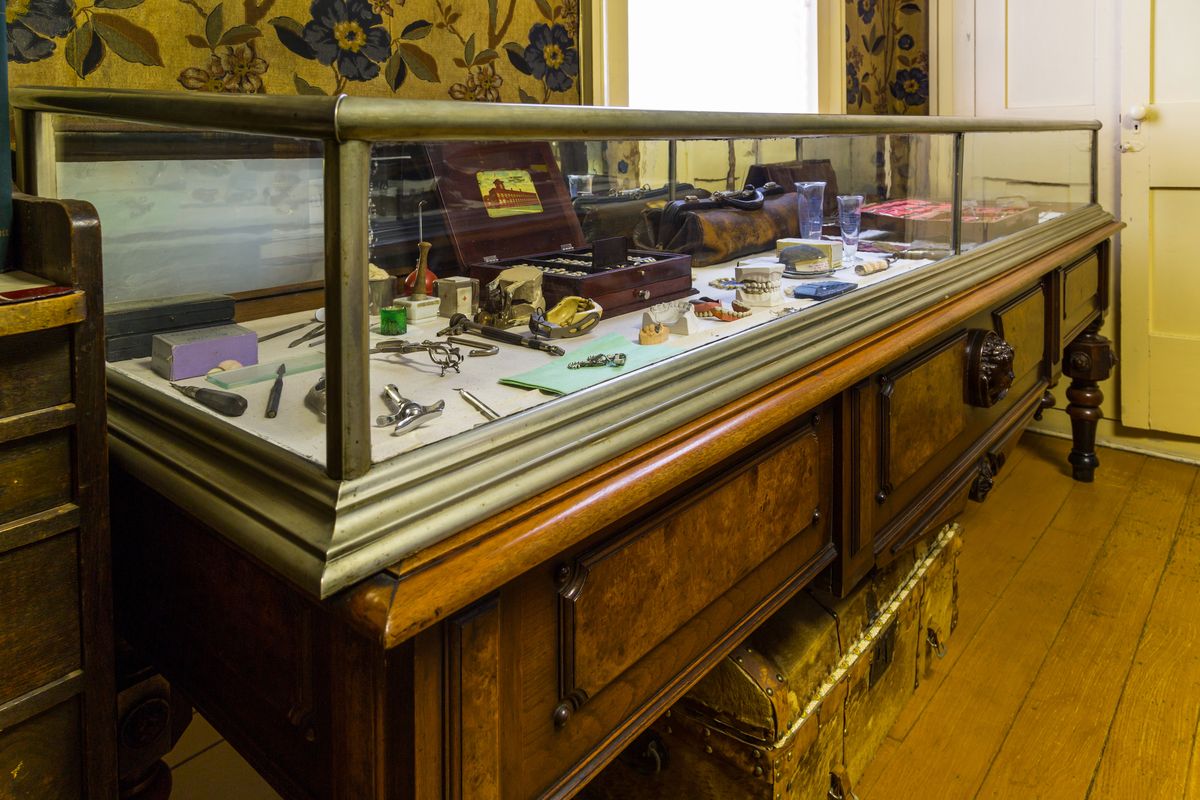 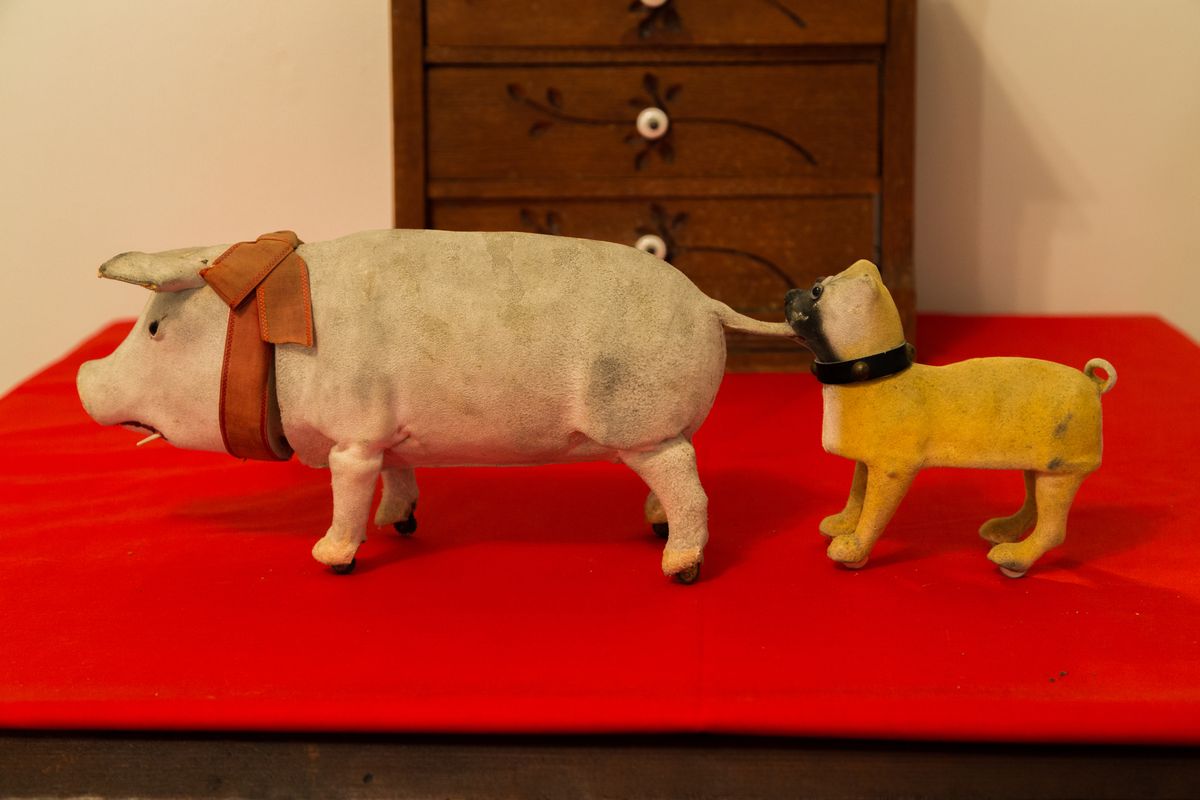 Reflecting play from the mid-1800s to the early 20th century, the toy room features toys that taught little girls to be mothers, and little boys to be men. This room contains dolls, carriages, play dishes, a carpentry box, scooters, marbles, and more. Made of porcelain, glass, wood, tin and cast iron, these toys were made to last a lifetime and beyond. 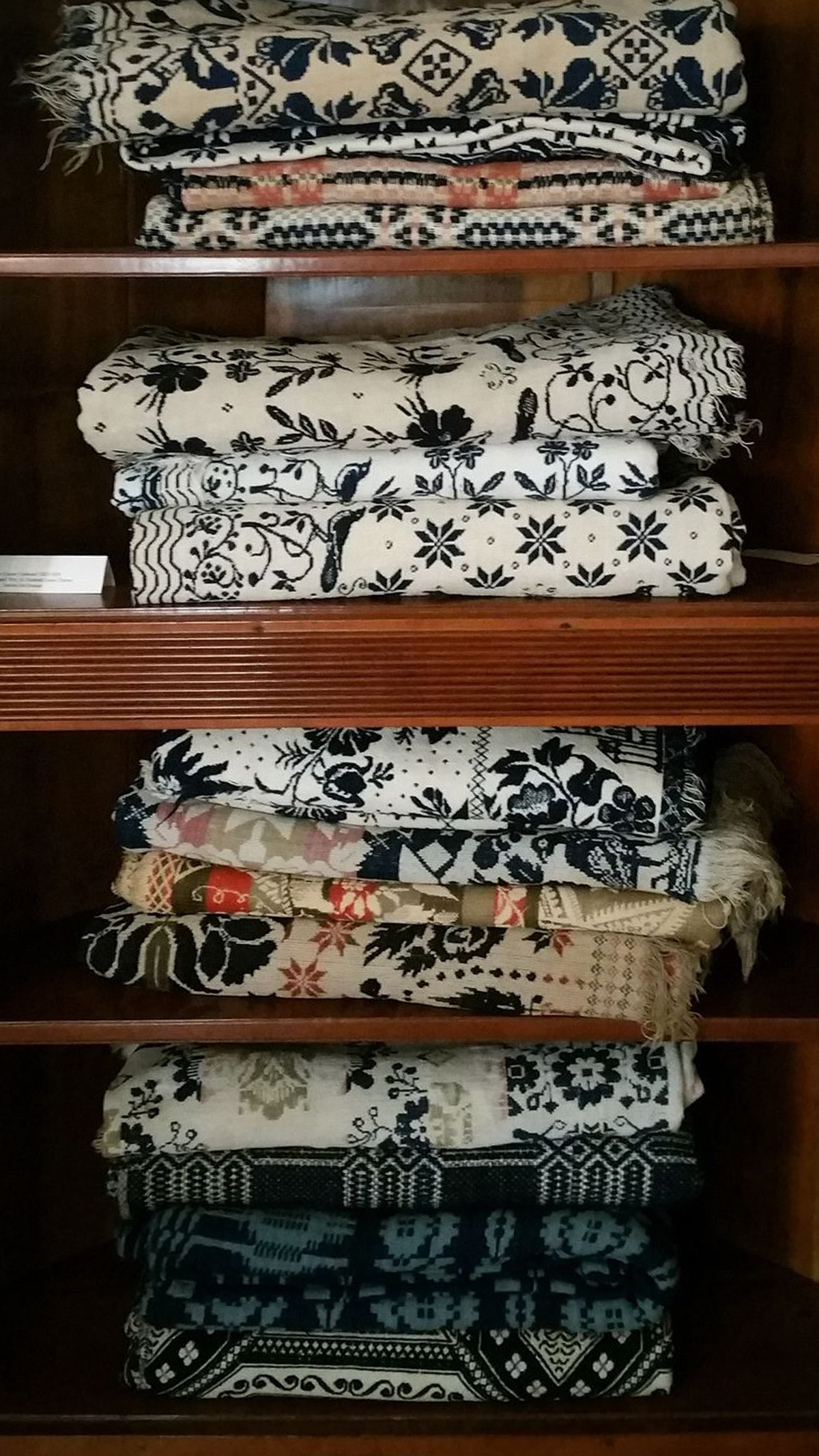 The Textile Room includes Quaker (the Society of Friends) quilts and coverlets. Quakers played an early and prominent role in the settlement of Clinton County.

Quaker influence remains today with over a half dozen active Quaker meetings in Clinton County. In 1870, a Society of Friends purchased the struggling Franklin College and established the Quaker college Wilmington College.

Of particular interest in the Textile Room is the abolitionist quilt, circa 1842, made by abolitionist Quakers in Clinton County and Newport, Indiana. Measuring about six feet square, each of its 16 blocks is signed by its Quaker woman maker.

While the quilt’s exact cause for creation remains unknown, scholar Ricky Clark, in the craft magazine “Piecework” (July/August 1995), suggests it was made by the women to strengthen bonds between the two Friends meetings during the abolition separation of 1843, “when Quakers were so divided over the question of abolition that members left or were excluded from the particular Quaker meetings to which they belong.” 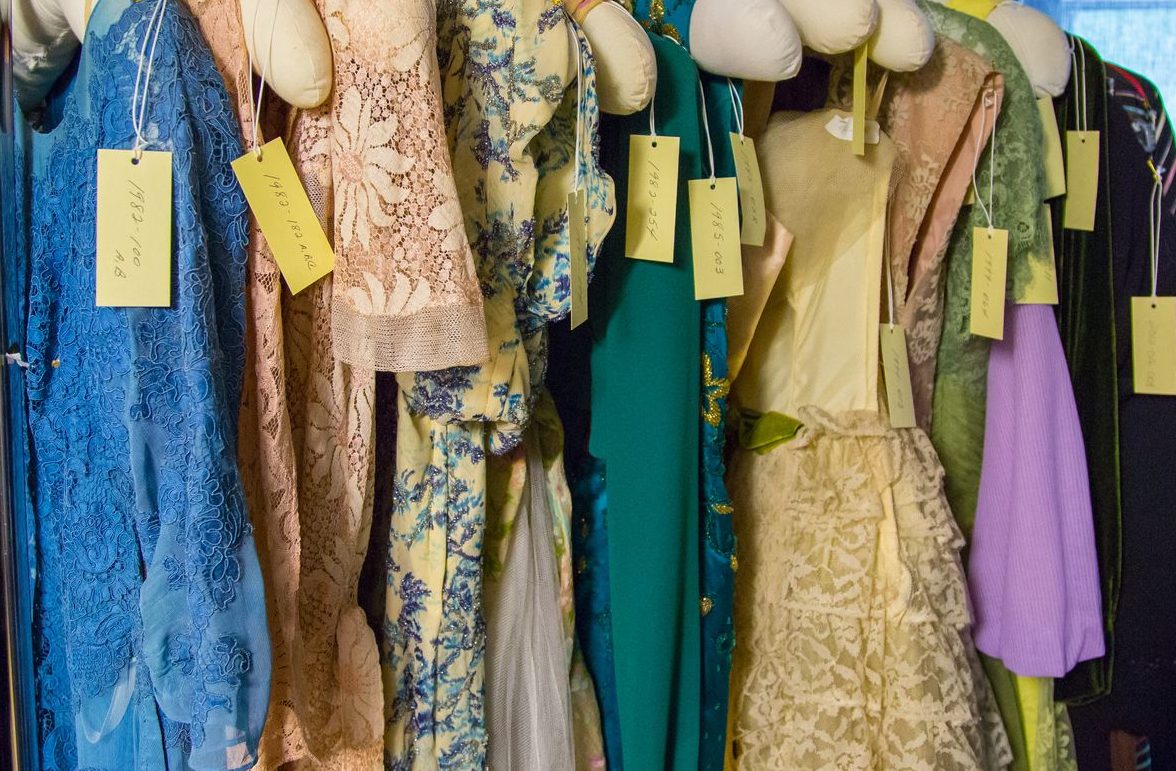 In the Artifact room are 19th and early 20th century artifacts such as medical and surgical equipment, hand tools, kitchen utensils, an Edison cylinder phonograph, and Adena Indian relics.The Society has a large textile collection and periodically features different eras of fashion.