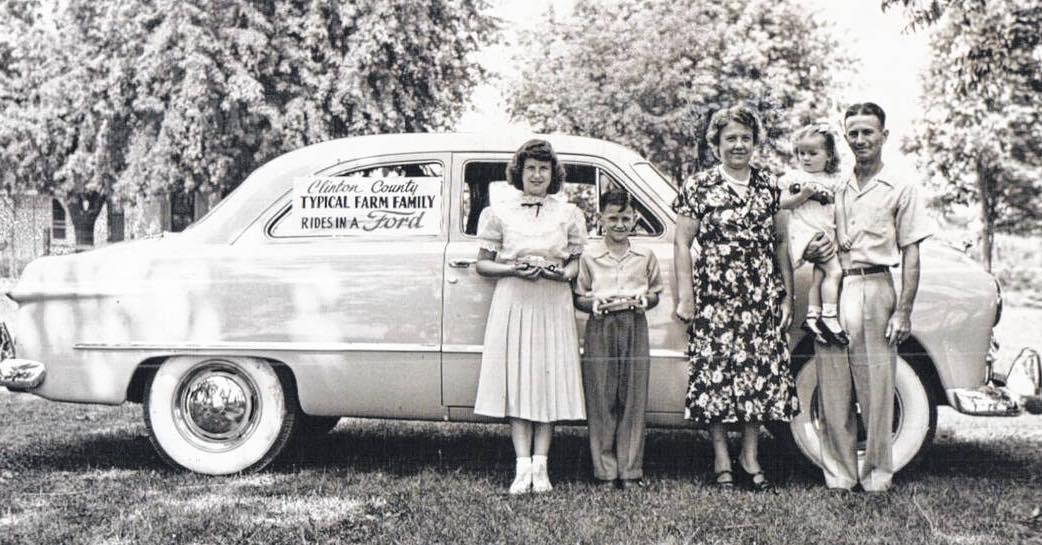 7/22: In regards to the Throwback Thursday photo that was published on 7/14/22, we received the following update from Sylvia “Bond” Henry.
Clinton County’s “Typical Farm Family” were Mr. & Mrs. Delbert Bond and their three children, Wanda Lee Bond, Marvin Bond, and Sylvia Jean Bond.  (Our records had them listed as the “Bend Family” not “Bond Family”).  The picture was from August 25, 1948.  An article published in the local paper at the time read as follows: “Clinton County’s typical farm family of Mr. and Mrs. Delbert Bond and three children, of near Lees Creek, joined 73 other typical farm families from Ohio counties  at the Ohio State Fair being guests of the Fair, the Ford Automobile Dealers and Columbus Dispatch”.
The Bonds were taken to Columbus by Ronald Fox, Manager of the Clinton Tractor Sales, in a new 1949 Ford from Jack Patton, Inc., local Ford Dealer.
The Sam Westlake family of Marysville, Union County, were the state winners in the “Typical Farm Family” contest and spent the week at the state fair living in a model farm home that was erected on the fairgrounds.
Though the Bond family were not the state winners, the Bonds were honored at the State house and then taken to the fairgrounds for lunch and to spend the remainder of the day at the fair.  (Note:  They did not get to keep the car).