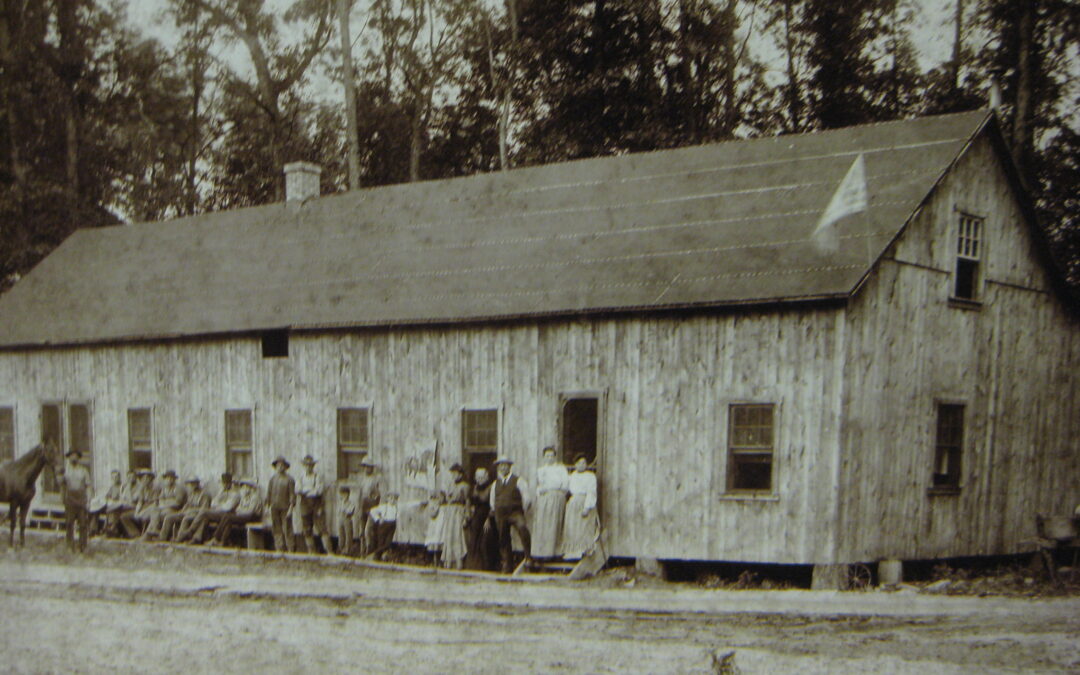 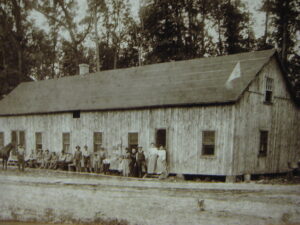 Wilmington News Journal Editor’s Note: Thank you very much to readers Melinda Danenbergs and Bob Gates — who separately provided information about last week’s photo of “The Big Onion” building — which includes this below:

Around 1890, the Marietta & Cincinnati was bought by the Baltimore & Ohio Railroad. In 1852, this railroad was the first to be completed in Clinton County of the various railroads that ran through the area towns and villages.

The Big Onion was a “flag-stop”, meaning the train only stopped when it was flagged down as it would appear to be the case when this picture was taken.

The women standing in the doorway are the two ladies that cooked and managed the Big Onion for the workers. One of these women is Eve Ramalia, the mother of Frank Dudley who managed the Clinton County Children’s Home north of Wilmington.

The Big Onion was a boarding house for the railroad workers and lumber men cutting trees in the Big Scott Woods. These industries flourished at the time because the railroad made it convenient to ship out the lumber as well as other goods such as hay, milk, cream, potatoes, and other kinds of produce. In fact, in an old column with news of Russell’s Station, the author stated that “Westboro along this railroad is shipping potatoes to the midwest in Kansas.”

At the time Westboro,was also a point of disembarkation for places south of town such as the school for girls at the Convent of the Brown County Ursulines, St. Martin’s, Ferristown, and Fayetteville. The Big Onion was on the way to Lynchburg passing Klock’s Crossing or Pleasant Grove, as it was known by the Union Village

Shakers bought 1,500 acres in Jefferson and Clark Townships in 1857. Pleasant Grove was changed to Klock’s Crossing in 1899, when a nearby resident along the road was killed by a train. Harley Klock, who had epilepsy, fell in front of a B & O freight train and was killed because the train could not stop in time. The term, “Kluck’s Crossing” is probably more or less a “colloquial form” of Klock, the name of the people who owned the land near the spot on the railroad where the unfortunate Mr. Klock was killed. (Canton, Ohio, The Stark County Democrat, August 1, 1899).

Between Westboro and Martinsville, at this time, the rolling Jefferson Township farmland was heavily wooded and because of this, with the convenience of the area railroad, the clearing of trees provided work for area residents. The Big Scott Woods, as it was named, was owned by Samuel P. Scott, a prominent banker and entrepreneur of Hillsboro.

Scott’s beautiful brick home still stands on the western edge of town, near the where the rail yards were and is home to the Hillsboro Schools Board of Education.

A lot of these stories are word of mouth, as the generations of families who lived this history were alive 150 years ago.

There was more industry along the railroad in this area, namely, the charcoal kilns at Klock’s Crossing. Lynchburg Road runs straight and true for some two miles out of Westboro, because it ran parallel with the railroad.

A ways out on the road toward Lynchburg there is a square turn in the road as it crosses the countryside past the old “Rattlesnake” one-room school house and the location of what the 1915 county history called a charcoal burning station.

The ovens were the biggest in this part of the state and gave employment to quite a number of men. The charcoal making industry died out, making Klock’s Crossing merely a flag stop.

Recently there was a picture posted on the internet which caused quite a discussion about where Klock’s Crossing was located. The picture showed the kilns. It was very interesting to finally see what was talked about but heretofore never seen.

The kilns were of the “beehive” type and large enough for the workers to stand on their tops. There were three of them in the picture. The kilns had to be tended night and day for 14 days to produce the charcoal.