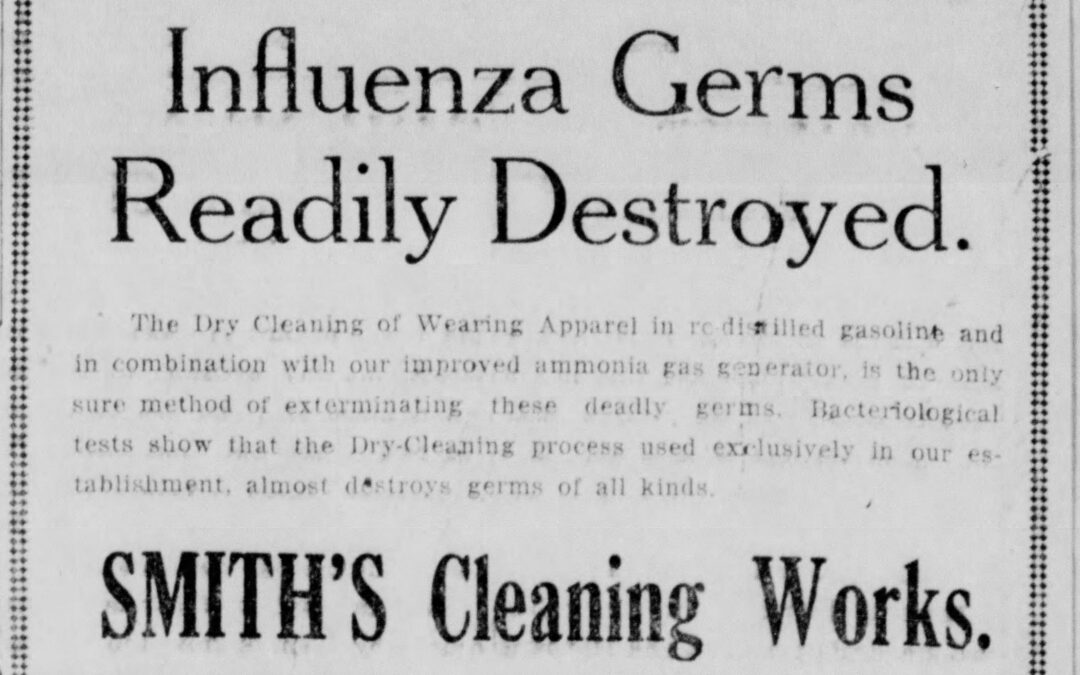 This article was written by Director Shelby Boatman on behalf of the Historical Society. It was published online and in print through the Wilmington News Journal on January 22, 2021. It is a two-part series reflecting on the impact of the 1918 Flu Pandemic in Clinton County, OH.

In 1918 Clinton County, flu talk turned from sarcasm to seriousness, then tragedy: How we dealt with pandemic of 1918 — Part 1

The 2020 coronavirus pandemic (COVID-19) came as quite a surprise to the nation last year.

Communities including our own here in Clinton County were placed under lockdown, favorite restaurants and shops were closed, and social distancing was encouraged.

Our families gathered around the television, radio, or even outlets like Facebook as press conferences and new health orders were enacted daily. The current residents of Clinton County had never experienced a worldwide pandemic such as this in their lifetime.

But citizens of this community once faced a very similar illness almost 100 years ago.

From Spain to US

The 1918 Flu Pandemic reached the soil of Clinton County sometime around September of 1918. The virus was discovered in the United States as early as March of that year, with France, Germany and the UK quickly following.

Often called the Spanish Flu, newspapers focused reporting on the virus outbreak primarily from Spain — which was neutral during World War I — to diminish distractions from the intense conflict. Spain’s King Alfonso XIII caught the disease and was heavily featured in news coverage at the time.

History has been unable to determine the precise location of the outbreak, so true origins of the 1918 influenza are still unknown. The flu pandemic killed an estimated 20 to 50 million people, including about 675,000 in the U.S. No treatments were available for the new outbreak and many dense communities worldwide suffered as a result.

Communal spread of the virus grew quickly as soldiers traveled across the world to be part of the fight — sharing tents, trenches and more.

The first wave of influenza within the U.S. was documented in early spring 1918 and was rumored to be mild. The second, more deadly wave was reported in fall 1918 which was highly contagious and often more deadly. This second wave lasted until March 1919.

Isolated cases were also documented well into the 1920s in larger cities such as New York and Los Angeles. 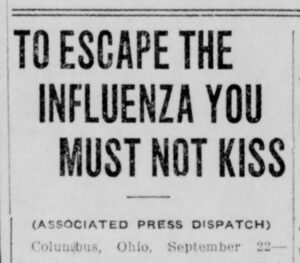 According to historic records, Clinton County was, at first, reluctant to acknowledge the outbreak. In September 1918, news of the “Spanish Flu” was often treated with humor and sarcasm by the area papers. On Sept. 23, an article from the Columbus Dispatch ran the headline “To Escape The Influenza You Must Not Kiss.”

Additional news coverage read, “Spanish influenza is a new form of grip, which in turn is a new name for the old-time severe cold, with aches and pains too numerous to mention” or “If it were popular to have small-pox, and the small-pox were something new, there’d be 99 new cases of small-pox there” sarcastically referencing the increased diagnosis of the 1918 influenza.

By Sept. 27, just three days following such statements, health officials in Wilmington closed two rooms of the Main School building to prevent the spread of the disease after a number of students had become infected. By Oct. 1 the entire school was closed due to sickness.

Popular home remedies were published which encouraged readers to “take a tablespoon of common baking soda, dissolve in a half glass of cold war; swallow it and go to bed for 24 hours — and stay there!” While this “cure” may have calmed anxious minds, it was clear it was not effective in preventing community spread.

The following day, on Oct. 2, the Wilmington Daily News reported the loss of 41 soldiers at Camp Sherman from the flu; 251 cases in Chillicothe, Ohio; and the closing of schools, theaters, churches and all public meeting places across the state.

All schools in Wilmington were closed due to community spread of the virus. Lack of staff at the Clinton Telephone Co. due to illness caused the switchboards to be overrun with calls — the company asked the community to minimize all telephone calls in order to allow service to continue with reduced staff.

Wilmington native Charles R. Starbuck was stationed at Camp Sherman while it was used as a WWI training camp in 1918. The flu claimed nearly 1,200 soldiers in total at Camp Sherman.

The facility was forced into quarantine and all soldiers were required to stay on base.

Back in Wilmington, Ester Doan waited patiently for her fiance Charles — communicating periodically through letters. He returned home on Nov. 9, 1918 and promptly arrived at Ester’s family doorstep on Fife Avenue. Their wedding was held spontaneously that same day, and the armistice of World War I signed just two days later.

Through research, it is believed Vernie Collins, 28, was reported to be the first local death due to the influenza pandemic — after being diagnosed only two days earlier.

On Oct. 4, 1918 all city streets throughout Wilmington were closed except to physicians. The Murphy Theatre and Wilmington College also closed their doors on Oct. 5, 1918 to help stop the spread of infection. Charles W. Murphy even postponed his visit from Chicago due to the outbreak.

Local newspaper deliveries were delayed due to lack of delivery boys and linotype operators. The local gas company’s employees were severely infected and few were left to stoke the fire flames. The company worried there may be a shortage of gas.

Miss Farren announced the Public Library would close on Oct. 7 due to the pandemic, and grand jury sessions were suspended until Oct. 28.

Mary Mills, a student at Wilmington College during the pandemic, documented her experience in a diary, unaware of its historic value.

Mary wrote, “The college pupils have been hit hard by the influenza epidemic. Nothing is normal here … all public gathering places are closed. The physicians are all dreadfully overworked, scarcely sleeping or eating.”

Dr. F. A. Peelle, the City Health Officer, tried to provide a community update on the situation but shared he was unable to speak with busy local doctors due to an outbreak of patients. All doctors were too occupied attending to patients — often treating them in their homes — to provide an updated report.

Part 2 of this series will be published next week.