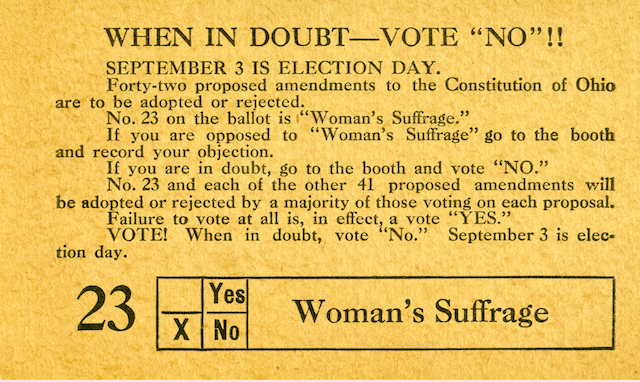 You may have noticed that the 100th anniversary of the 19th Amendment was officially celebrated within the United States on Aug. 18, 2020. The 19th Amendment prohibits states and the federal government from denying the right to vote to citizens of the United States on the basis of gender. While COVID-19 may have dampened the amount of celebration nationally, I would be remiss if I overlooked the opportunity to share the local impact suffrage has had on Clinton County.

According to the National Parks Service, the suffrage movement in Ohio began to take shape quickly after the Civil War, and two of the earliest organized conventions for the movement were held in Ohio as early as the 1850s. Women won the ability to serve as candidates and vote in School Board Elections between 1894-1895.

Within Clinton County the first women on record to run for School Board were Catherine West and Ruth Mills. These tenacious women faced many challenges during their campaigns. There was only one polling place in Wilmington for the community to cast their ballots during the election of 1895 and numerous ads were published praising “domestic and proper” women while scorning those “leaving hearth and home” to dabble in the political arena. 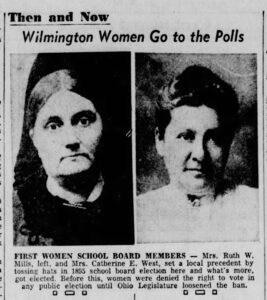 Women were forced to prove their identity and party affiliation at polling locations before being allowed to enter the building to vote. At this time in history, if a ladies’ husband hadn’t already put his foot down on her growing political views the community’s repercussions and shame could be the end of her standing.

Suffragettes, nationally and locally, risked much more than we may be aware of today. During this early election for School Board around 256 women took to the polls in Wilmington. That total and those cast by male supporters were enough to elect Catherine West who received 450 votes and Ruth Mills who earned 391 votes.

While also managing family life, both women served their terms respectfully, with the local paper claiming they made “excellent board members”.

As the trail for women’s suffrage continued, Congress eventually approved the 19th Amendment in 1919. Ohio was one of the earliest states to ratify the amendment on June 16, 1919. By August of the following year, 1920, thirty-six states had ratified the amendment and it was enacted as part of the U.S. Constitution.

The right to vote could no longer be based or denied on the basis of one’s sex.

According to an election article from the Wilmington News-Journal on November 2, 1920 the first woman to vote in Clinton County was Mrs. E. R. Hazard, “having cast her vote in her home precinct of Martinsville at precisely 5:30 o’clock when the polls opened. Mrs. Odessa Hixson was the county’s second female voter, taking her place just behind Mrs. Hazard”. 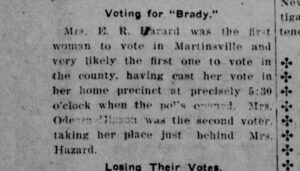 While we may not know the names of local suffragettes such as Mrs. Hazard and Mrs. Hixson, we do still know and celebrate the identities of early influential Clinton County women — women who made a difference in their spheres of influence and improved our community for the future.

Ellen Wright was one of four students from the first graduating class of Wilmington College in 1875. She later became a legendary teacher for 40 plus years, a mentor, and friend to many at the college and within the community. She was fondly referred to as “Teacher Ellen” throughout her life and became the librarian at Wilmington College after retiring from the classroom. Her life story was also recently featured in an article by Wilmington College.

Elizabeth Shrieves was the first female doctor in Clinton County, starting her practice in 1901, as well as a teacher and gymnast. She graduated from Wilmington College in 1884, in a time when female doctors let alone authoritative roles for women were somewhat unusual. She studied in clinics abroad including Spain, Portugal, Italy, France, Germany, and England. 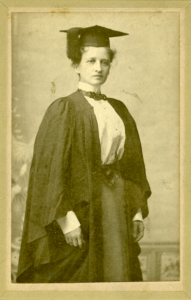 According to History Center records, Emma Shrieves, Elizabeth’s sister, was a High School teacher turned Real Estate agent and landlord who built the first apartment building in Wilmington and converted the First National Bank into a hotel. 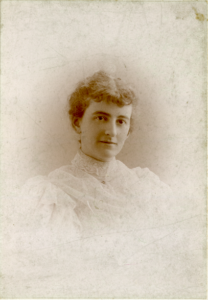 You may remember that Kathryn Hale was the first female pilot in Clinton County. A woman who helped establish our County Airport in the 1960s, a member of the City School Board of Education – thanks to the female trailblazers who came before in 1895 –  and she even helped acquire land for what is now Denver Place Elementary and Wilmington High School.

Last but not least, Mary E. Taylor Adams, who is buried in Sugar Grove Cemetery, was the first female Ohio Volunteer Nurse in the Civil War. Her husband enlisted and fought but did not survive. Mary was inspired to support her country after her husband’s death through service of her own at only 23 years old. She enlisted and was stationed at Camp Dennison – near Milford and served for four years where she cared for Union soldiers brought in from the battlefields. When she arrived at Dennison, she found no working hospital. A stable barn was all that was available. She converted it using fresh straw and blankets on the floor for wounded.  She frequently returned to Wilmington to collect supplies and visit her young daughter, who was cared for by Mary’s parents.

As we continue to celebrate the national historic meaning of the Nineteenth Amendment and suffragettes who championed the uneasy rights for women, may we also remember local ladies who advanced our community and made a difference for the women of today. May we not forget how Clinton County women were suffragettes of their own times as well. Let us celebrate their historic accomplishments and those of our Clinton County women today.

For more on this article visit https://www.wnewsj.com/news/143290/tenacious-women-overcame-challenges-commemorating-100-years-since-19th-amendment