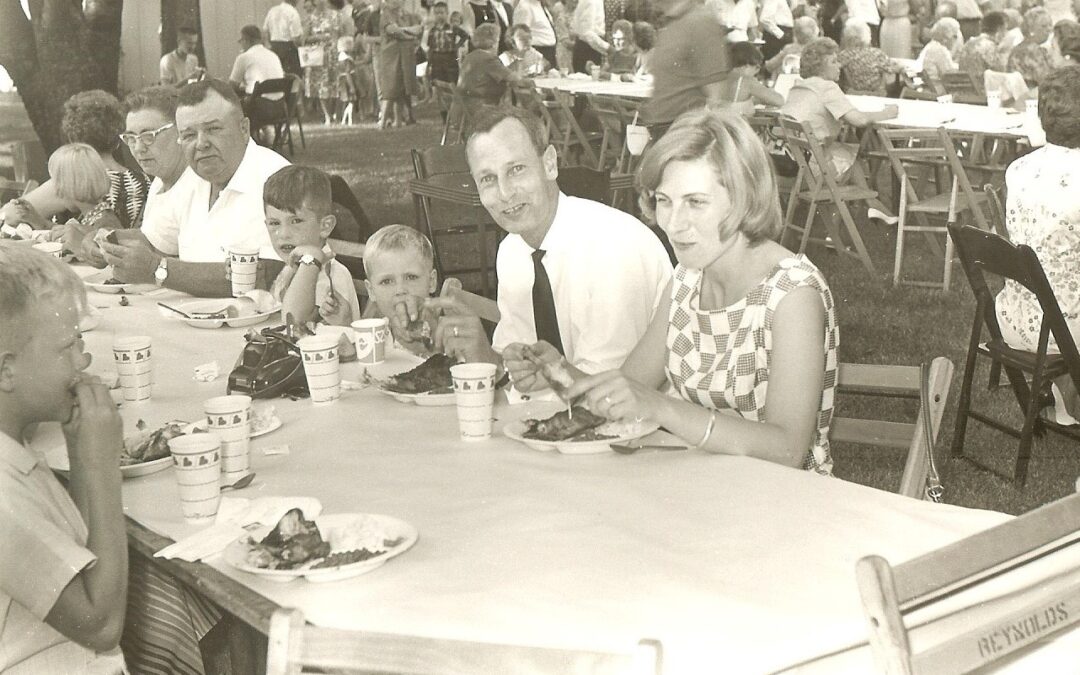 A Chicken Barbecue was held on July 21, 1963 on the grounds of the Clinton County Historical Society. Can you tell us more?

This image was originally posted on the Wilmington News Journal website and can be accessed at this link.

Follow-up to this Throwback Thursday image:

Prior to Thursday morning, all that most of us knew about our Aug. 12 Throwback Thursday photo is what was written on the back of it: “Chicken Barbecue was held on July 21, 1963 on the grounds of the Clinton County Historical Society.”

But History Center Director Shelby Boatman was quickly given an interesting backstory, which includes a wedding in Germany and even the POW camp in Wilmington in World War II.

She writes that the following information was provided by Brooke, David, and William Beam: 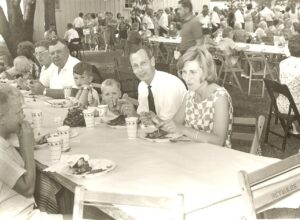 Pictured right to left on the facing side of the picnic table are AnnaLou Jacobs, Rolph or Rolf (?) Jacobs, the Jacobs’ son, David Beam, Joe Beam, Elizabeth “Betty” Beam, and the Jacobs’ daughter to her right. Facing away from the camera in the foreground corner is Bruce Beam.

Rolf was a German POW serving in Wilmington when he began working on the Beam family’s farm. According to William, the POWs knew that Elizabeth was a good cook and offered to work on the farm in exchange for hearty meals. Rolf eventually brought his family back to the United States including to Wilmington to visit during the 1960s.

In 1956, Joe was serving in the military in Germany and Elizabeth traveled overseas to visit him. While there, they wed in Germany, and AnnaLou Jacobs was Elizabeth’s matron of honor.

Joe Beam is currently in the rehab unit of Ohio Living Cape May Cape May after breaking his hip.

A few followers on Facebook have also commented that the man in the dark polo shirt in the background (behind the Jacobses) is Harry Miars.