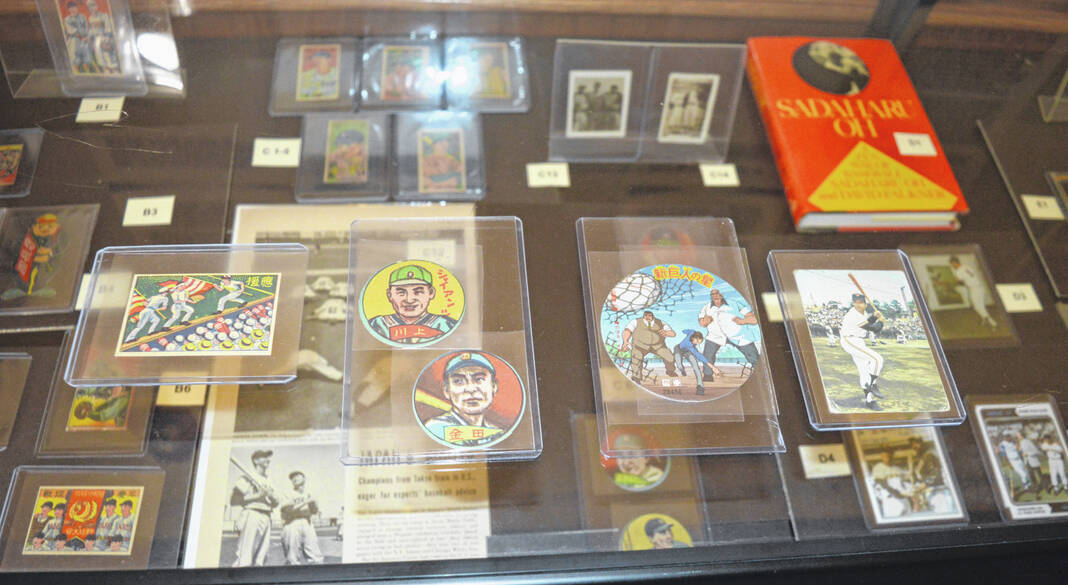 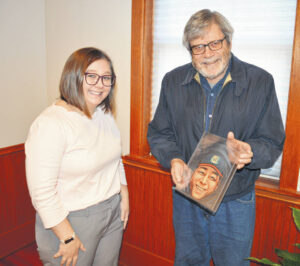 From left are Clinton County Historical Society Executive Director Shelby Boatman and Wilmington resident Ron Rembert who is sharing some items of his vintage Japanese baseball mementos in a History Center exhibit. Rembert holds a mask of famous Japanese player Hiroshi Oshita. This was one of the baseball card styles produced in Japan.

More than half a million spectators attended the six 1949 baseball games played across Japan which, as Rembert notes, was billed by the U.S. government as the “U.S.-Japanese Friendship Tour”.

For the tour’s games, the Seals played a group of Japanese All-Stars. The exhibit contains five of the 1949 rectangular Menko set of San Francisco Seals cards produced in Japan with the American players in red, white and blue uniforms, as well as six round Menko cards of the Japanese All-Stars.

Right from the start Rembert beheld the various designs and colors — a “special quality of these cards” — and over time he became more interested in them, finding them intriguing and, sometimes as with the Seals’ diplomatic tour, historically significant.

He has a particular interest in Japan’s annual national high school baseball championship tournament held in August. This school tournament has a longer tradition than does professional baseball in Japan, and it is a highly celebrated athletic event there, he said.

The exhibit has 1930s postcards of the event, one showing school teams marching in a tournament parade. 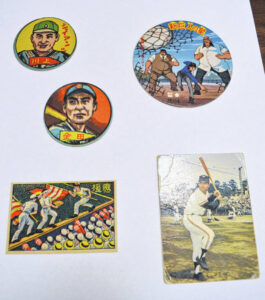 Here are examples of the Japanese baseball memorabilia on display in a temporary exhibit at the Clinton County History Center.

Another section of the exhibit pertains to university baseball in Japan. A card believed to go back to the 1930s depicts opposing teams meeting at home plate for a respectful bow prior to the game’s first pitch.

Six exhibit items relate to Sadaharu Oh, the most famous baseball player of the 20th century in Japan. Baseball cards show Oh in his “flamingo-style” batting stance, where he placed his weight entirely on his back leg and lifted his left leg, with bat angled back for balance.

While an unusual stance for a hitter, it worked for him. He slugged 868 home runs during his professional career.

Japanese vintage baseball cards, especially those popular before World War II, have a very different look than the statistically oriented American cards. Take for example, the round Menko cards. They are part of a game involving the flipping of these disc-shaped cards.

Further, the colors are eye-catching, said Rembert. The inclusion of math problems on the cards provides an educational challenge. And the small circles with a hand in different positions on the cards offer the option of playing a game similar to “hand, paper, scissors.”

This year is the 150th anniversary of baseball being introduced in Japan, said the former professor.

Public hours at the Clinton County History Center are 1 to 4 p.m. on Fridays, and 10 a.m. to 2 p.m. on Saturdays. Admission for Clinton County Historical and Genealogical Societies members is free; non-members need to pay $5. This exhibit will remain on display for viewing until Saturday, December 17.